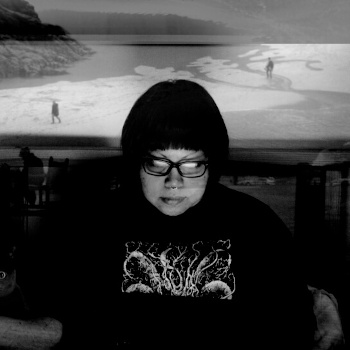 Back in March I received some ‘spare bob’ from the Bradford Producing Hub to look at creating a live version of the music I record and produce mainly on my own. The money is paying artists directly to share their time and expertise, and for a venue for us to meet in.

Last week I got to spend some time, at FUSE, with Shi Blank, Bradford musician, game designer, zine maker and podcaster, and free software advocate. Shi is an inventive artists with a wealth of experience in live work, art installations, and getting creative with audiences.

The original plan for the the session had been to look at how free software tools can be used in musical performance - for music, visual art, and more.

However, with the clarity of someone one step removed, and after listening to me bleating on about my mixed up ideas for a while, she decided to take me on a journey to bring some focus to my work.

We started by looking at performances I liked - and decided that small, intimate, not necessarily 100% polished, was my thing. Think NPR Tiny Desk.

I’m also keen to keep things low-carbon, and maybe participatory - i.e. don’t take a big rig on a road, and maybe involving people will be fun and low impact. (There are plenty of guitars around, why carry one?)

But for people to play with you, they need ways to do that. So I’m exploring

Most of my Field Recording tracks have fairly simple parts and/or sounds - but just need live orchestration. Perhaps my role is more conductor than player?

My next BPH Session outing, we decided, is going to be a public practice session, where I’ll try out these ideas, with a score, maybe with the people that have already helped me so far. We’ll see!