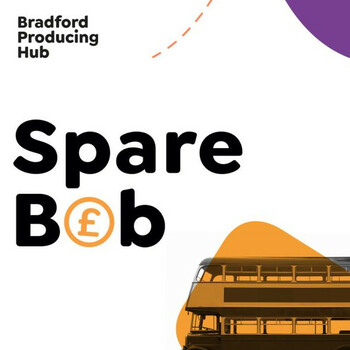 A live performance project supported by the Bradford Producing Hub.

Back in March I received some ‘spare bob’ from the Bradford Producing Hub to look at creating a live version of the music I record and produce mainly on my own. The money is paying artists directly to share their time and expertise, and for a venue for us to meet in.

Originally I saw these as one-to-one sessions, but many of the artists are also keen to spend time learning from each other, so hopefully there will be a few of us at each event.

I’ve now got 4 artists, that I can pay, and that have agreed to work with me, and additional support from FUSE Artspace to provide an affordable space to work in.

Bradford based, Dean McPhee is a solo electric guitarist with influences in psychedelic rock, post-rock, Mali blues, minimalism, krautrock, British folk, bluegrass and Moroccan trance. He plays a Telecaster, through a valve amp and his sound incorporates decaying delay effects, reverb and shimmering tremolo. He’s played and toured as a solo artists since 2006 so has a wealth of experience for me to draw on.

Bradford musician, game designer, zine maker and podcaster, and free software advocate, Shi Blank is an inventive artists with a wealth of experience in live work, art installations, and getting creative with audiences. Our session will look at how free software tools can be used in musical performance - for music, visual art, and more. We’ve also started working together recently on the Play Music Project and Shi played base on Surf Song which was part of the Heavenly Creature Records release to raise money for Girls Rock School Edinburgh.

Eli is a composer, sound artist and audio designer, specialising in music and sounds for animated, interactive, and interdisciplinary works. They have been creating things for others since 2012. They are currently based in Yorkshire, UK (not quite Bradford, but close enough!). Again, Eli brings a wealth of experience, is also a guitarist, and some of their work fits well with my more ambient offerings.

Bradford based sound artist, musician, sound and lighting technician, bassist (with Quack Quack), pedal wrangler and more, has been an inspiration for a number of years. He inspired me to start recording the outside world, and to start the Record Club a number of years ago. Collaborator in the Reveil event recently, and working at Lumen Arts in Leeds, Stu is going to bring his expertise around playing and touring live music, projection and sound to a session to look at the latest ideas in a low carbon age.

We’ve also got Lukas Hornby, who I worked with previously on an experimental sound project Altered Lane earlier this year, involved via his relationship with FUSE